The SEAD project is underpinned by a well established set of scientific disciplines and principles which allow past environments, climates and human impacts to be reconstructed from proxy data sources.

SEAD primarily handels data from the Quaternary period, the last 2.6 million years. The vast majority of data, however, are from the Holocene period, the last 12-13 thousand years, during which humans have had the most dramatic impact on the planet.

Environmental archaeology uses scientific methods to study past environments, human activities and the relationships between them. This is primarily undertaken through the use of proxy analysis methods and cross-comparison of the archaeological record. These methods are applied to a wide variety of spatial and chronological scales, from individual on-site contexts to landscape scale investigations into environmental changes and resource use over millennia.

Palaeoecology is the study of past environments, climates and ecology. Consideration of human impact is also a major component, at least when looking at the Holocene. Palaeoecology is perhaps less concerned with the specifics of on-site past human activities, and more with larger issues of environmental and climate change.

A proxy is something that provides information on something else. For example, insect species are proxy indicators of the environments in which they live, including micro-habitats, hydrology, temperature etc. Many of the things that we would like to know about the past cannot be observed directly, we would need a time machine to enable this. So we have to study the remains of plants and animals, or chemical signals, preserved in sediments deposited at the time of interest, in a process which is known as proxy analysis.

These methods require an understanding of the relationships between the events or conditions and the presence or abundance of the proxies studied. For example, in order to study past air temperatures by looking at fossil beetle remains, we must understand which species respond to temperature changes and what their particular temperature tolerances are. In order to do this we need modern reference data, collected by ecologists, biogeographers and climatologists, and mathematical models which allow us to translate the fossil insect data into temperature data.

A single proxy variables rarely can illuminate more than a limited number of aspects of the past, such as summer temperatures, precipitation, which tree species were present. Analyses can be improved by examining more than one proxy, the relative advantages of one compensating for some deficiency in the others, or adding further support for any conclusions, a process which is known as multiproxy analyses. The more proxies used, the greater the possibility for understanding the past, although the results are seldom easily interpreted.

Click here for more details of specific proxy analysis methods and their relative advantages and disadvantages.

Proxy data, by way of their interpretation, provide useful information on specific aspects of the past. They can also be used to provide even more information when combined with our understanding of natural processes. That is to say, incorporated into empirical models which simulate the flow of components or chemicals, such as vegetation or phosphates, over space and time. Modelling is essentially inseparable from scientific analysis, and even the simplest idea of how a part of system works is actually a model, but those which allow us to investigate changes in past environments and climates tend to be highly complex. 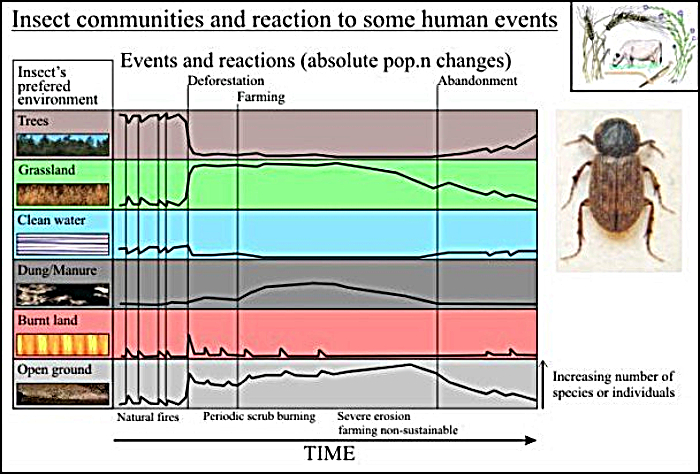 Insect species identified in archaeological samples may have a number of possible origins. It is the job of the palaeoentomologist (fossil insect scientist) to interpret these species in terms of their most probable origins and meaning in the particular context.

One of the simplest form of model in our field is the reconstruction, which is essentially a snapshot of an environment represented by a particular samples. Reconstructions from strategraphic sequences provide us with a series of snapshots spanning the period during which the sediments where deposited. When produced from several archaeological contexts at a site they can provide us with indications of conditions in different parts of a settlement or building at different phases of its existence, and even abandonment.

Fossil fly pupae (Diptera) as indicators of changing environments. The grey outlines represent the excavated walls of an abandoned farm site in Greenland. 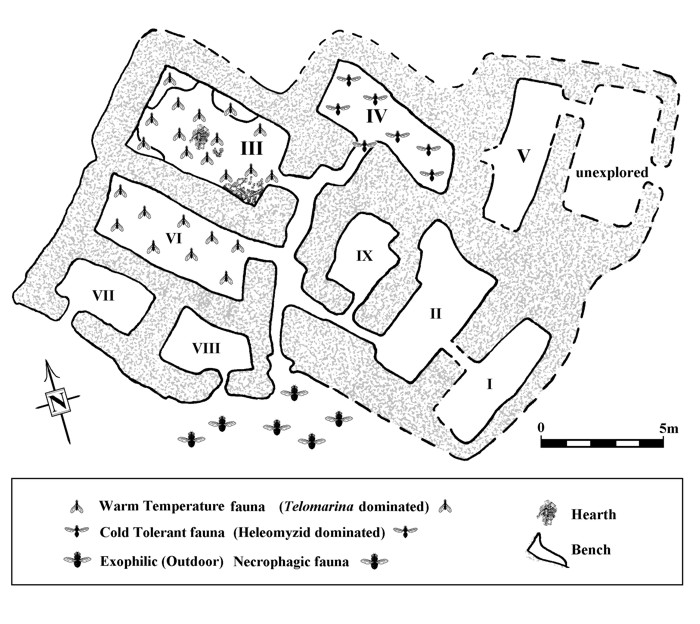 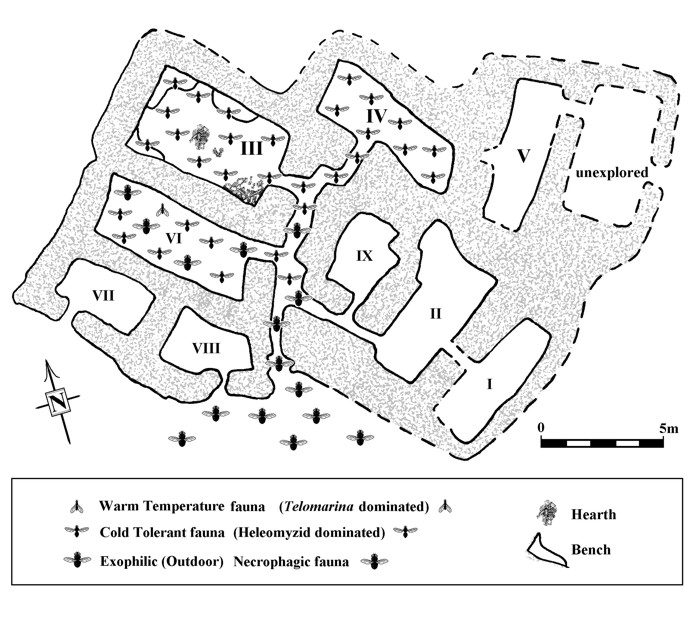 The abandoned farm. Note the near total absence of warm tolerant flies, as the building has cooled since abandonment. The cold tolerant species now occupied all analysed rooms, and the outdoor, decay liking species have moved in.

Simulation is often used to describe the process of running a model over a period of time, perhaps with the aim of predicting unknown variables or future conditions. In other words, simulation and prediction are intimately related concepts.

A clear understanding of processes, environments, climate and human actions in the past is essential if we are to understand the current state of the world, and predict future scenarios and how our actions may influence, or be influenced by them.